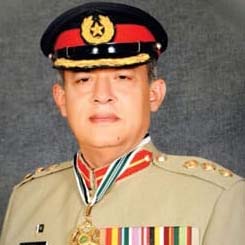 Colonel Akmal is a well-versed & well reputed life-coach who possesses a rich profile with regards to human resource development with special emphasis on youth development. During military service, besides other operational appointments, he has recurrently been involved in selection of youth for Armed Forces of Pakistan in varying capacities including Command of ISSB Gujranwala. Colonel Akmal has a Master’s Degree of Business Administration with a majors in Disaster Management and has conceptualized a new dimension know as Emotional Risk Management. He has also been a sought after faculty member of many prestigious universities in Islamabad. Furthermore, he has been contributing articles in eminent journals and is a regular speaker on the subjects of emotional intelligence, youth development and disaster management. He has been awarded Sitara-i-Imtiaz (Military) in acknowledgement of his highly praiseworthy service and devotion to duty.

Ever since his retirement in 2014 he is supervising Rahnuma, an eminent youth development institution, whereby the prime goal is to optimize national youth’s potentials all over the country. The institute’s emphasizes on grooming and development for selection in various professions, Career Navigation and Emotional Management in Career Development, besides other areas of interest to youth.

Leadership training in the 21st century has taken a much different turn in many public and private sector organizations. Consequently, in today’s workplace, a high level of emotional intelligence has become an important factor for success, influencing productivity, efficiency and team collaboration. Rahnuma endeavors to ensure that its beneficiaries thrive socially and emotionally so as to actualize their hidden potentials, which ultimately optimize their individual and team professional matrix. Rahnuma helps organizations and people understand the importance of managing emotions and tools, skills for the same, providing customized models of emotional intelligence grooming varying from; on location awareness sessions to on Campus activities.

At Rehnuma, the candidates shall be provided an opportunity to aptly prepare themselves for the Initial test and the ISSB test. Each preparatory activity shall take place under the hands-on supervision of seasoned armed forces personnel.
By Col.(Retd) Akmal Khan
Register Here
Course Info

Pakistani armed forces are known around the world to have a highly consummate set of professionals, as attributed to their keen observation of the personalities that they reckon, would be befitting to their atmosphere and work-ethic. Which is why “Rehnuma” is a fresh endeavor, whereby the aspiring military candidates shall be provided with the basic tools that would enable them to attain and harness the physical capability and the personality traits required by Pak Armed Forces.

At Rehnuma, the candidates shall be provided an opportunity to aptly prepare themselves for the Initial test and the ISSB test. Each preparatory activity shall take place under the hands-on supervision of seasoned armed forces personnel. The training sessions for the tests, both initial and ISSB, are to be held separately on a course of 30 days for each program. In addition, the candidates shall be charge no extra fee, provided the case whereby a candidate wishes to gain additional instructions regarding the military training.

With the prime focus upon personality building, Rehnuma strives to incorporate the essential knowledge with physical and mental fitness, in order to testify to the commitment of grooming the personalities and shaping the future of the aspiring prospected Pakistani military cadets, and ultimately shaping the fate of Pak-armed forces.Given the fact that the ISSB training academies all across Pakistan are fulfilling the mere basic parameters, Rehnuma would like to take the opportunity to bring the more critical elements of ISSB assessment to the candidate’s knowledge. Following are the key deliverables being focused upon by Rehnuma, to create a proficient aspiring cadet with promising prospective:

The two key elements of the training are as follows: